On February 1, 2021, the Myanmar military (Tatmadaw) led by Commander-in-Chief Sr. Gen. Min Aung Hlaing ousted the democratically-elected National League for Democracy (NLD)-led government in a military coup. The political situation remains fluid and risks jeopardizing the last decade’s efforts at advancing federal democracy and forest sector reform. Forest management in natural Reserved Forests is exclusively conducted by the Forest Department, while the harvesting and extraction of timber is the responsibility of the state-owned enterprise (SOE), the Myanma Timber Enterprise (MTE). Both of these departments fall under the Ministry of Natural Resources and Environmental Conservation (MONREC). Until 2019, the MTE was permitted to retain 55 percent of profit from timber sales in their own “other account,” estimated at more than $2 billion since 2012. This money is gone, without any public accounting.

In 2019, the government confirmed that the “other account” had been closed and all MTE profits must be transferred to the state treasury. Within the context of the recent military coup, there is an elevated risk of illegal logging and that the revenues from state sanctioned logging could again move ‘off-budget’, and the forestry industry more broadly could be used to finance violations of human rights in Myanmar.

In response to the coup, the US, EU, UK, Switzerland, and Canada passed sanctions on entities involved in the Myanmar forestry sector that effectively constitute a ban on all trade in timber products. All five markets do not prohibit the trade in timber directly. Rather, they have sanctioned the MTE. Because the MTE is the only source of legal timber in Myanmar, sanctions on the MTE are a de facto ban on any trade in Myanmar timber. All have also sanctioned military-linked conglomerates, including the Myanmar Economic Corporation (MEC) and its subsidiaries, thus prohibiting the use of the MEC-owned port of Alhone (Yangon). The EU and Switzerland have also sanctioned the Forest Products Joint Venture Corporation Ltd. (FPJVC), which is majority government owned. The UK and Canadian sanctions regimes also require businesses operating in the UK or Canada (regardless of the business’ own nationality) to conduct due diligence to ensure that they are not violating sanctions. 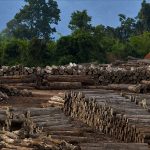 Despite sanctions imposed following the February 2021 coup, Myanmar exported more than $190 million worth of timber, including to countries that have sanctions on the country’s state-controlled timber monopoly, according to a new report from Forest Trends. The continued trade highlights the challenges of effectively enforcing sanctions, the report authors say; a lack of reporting on the timber trade from within the country also emphasizes the military regime’s purposeful lack of transparency. 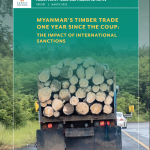 Myanmar’s military junta exported more than $37 million worth of timber to nations with active sanctions on the country’s state-run timber monopoly, according to the environmental advocacy group Forest Trends. In a report released yesterday, the U.S.-based organization examined the impact of sanctions imposed since the military’s seizure of power in February 2021, arguing that much more needs to be done to choke off the junta’s ability to profit from sales of timber and other natural resources. 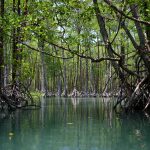 Although more than half of Arakan State is covered by natural forests, these forests are being destroyed at alarming annual rates, and environmental groups point out that illegal logging is one of the main causes of deforestation, rather than legal private logging. More than 494 tonnes of illegal timber were seized in Arakan State in January 2022, according to figures from the state’s Forest Department. 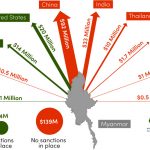 Despite sanctions imposed after the coup in Myanmar, the US, EU, and UK still imported >$34 M of timber from Feb-Oct 2021. But most of Myanmar’s timber trade remains unsanctioned, with China and India alone reporting 4x as much during this period

Forest Trends recommends that the US should up its sanctions regime to include the Myanmar Foreign Trade Bank. Given that the junta collects timber payments in US$, including MFTB would help overcome leakage to non-sanctioned markets. 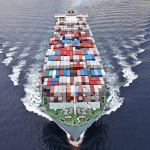 As trade in Myanmar teak continues amidst sanctions, a ban on all Myanmar timber imports is necessary. Since the illegal attempted military coup in February 2021, the United States has imported 1,565 metric tonnes of teak from Myanmar, even though sanctions began soon after. Following the attempted coup, the Myanmar military has carried out acts of terrorism against Myanmar people, murdering over 1,400 civilians and imprisoning 11,000 more. 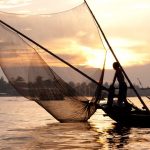 Why has illegal logging increased in the Greater Mekong?

Logging companies and criminal gangs are destroying forests in East Asia at an unprecedented rate. Myanmar is grabbing world headlines for its citizens’ struggle against a military regime that overthrew Aung San Suu Kyi’s elected National League for Democracy on Feb. 1. Less well known about the country of 54 million people is the ongoing illegal logging that has been destroying the forests of Myanmar. 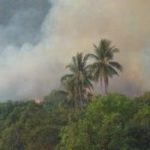 Myanmar seizes over 510 tons of illegal timbers over one month

Myanmar authorities seized over 510 tons of illegal timbers across the country over one month, according to a release from the Forest Department under the Ministry of Natural Resources and Environmental Conservation on Wednesday. The seizures were made in the country’s regions, states and Nay Pyi Taw Union Territory from Aug. 30 to Oct. 3. 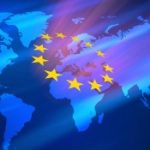 Negligible fines and inadequate enforcement are turning Italy into a hotspot for illegal Myanmar timber, a new report says. At least 27 Italian traders have been importing Burmese teak into Europe despite timber imports from Myanmar being against the law. Italian traders are exploiting the country’s inadequate enforcement to ship timber to the rest of Europe and circumvent the EU’s sanctions and regulations.

An undercover investigation by the Environmental Investigation Agency (EIA) has exposed how a number of Italian companies have continued to profit from the sale of valuable timber from Myanmar. The same report also indicates that other European nations have successfully cracked down on the export and use of timber from Myanmar, especially teak where the superyacht industry is concerned. European authorities agree with the EIA that the importation of Myanmar timber to Italy is in violation of the EU Timber Regulation (EUTR).

Timber logging usually takes a break in the monsoon. Even smugglers halt their activities from mid-May to early October to avoid the rainy season. However, Salai witnesses 15 to 20 timber trucks passing each day near his village in Hkamti, Sagaing Region—a highly forested region in northwest Myanmar between the border with India and Kachin State. 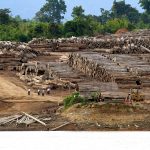 The European Union has imposed sanctions on Myanma Timber Enterprise, a state-owned entity that regulates all harvesting and sales of Myanmar timber. The new sanctions mean it is now illegal for businesses in the EU to directly import any timber from Myanmar. While the sanctions send a strong political signal to the junta, experts say their actual impact on Myanmar’s illegal timber trade could be limited. 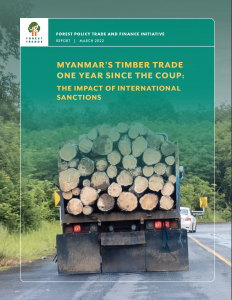 Myanmar’s Timber Trade One Year Since the Coup
On February 1st, 2021, the military launched a coup d’état against the newly re-elected government of Myanmar. Over the past year, the military junta has been accused of massive human rights violations, arresting more than 12,000 people, killing more than 1,500, and instigating a growing humanitarian crisis that has seen more than 400,000 internally displaced[…] 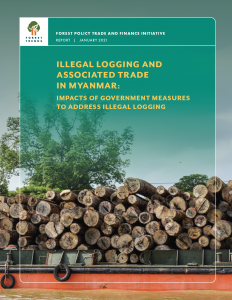 Illegal logging and associated trade in Myanmar: Impacts of government measures to address illegal logging
Since 2000, the forests of Myanmar – some of the last remaining old growth forests in Southeast Asia – have been cleared at an ever-increasing rate. Between 1990 and 2020, 27% of the country’s forests was lost, with one-third of deforestation directly due to logging. At the same time, the economic importance of forest products[…] 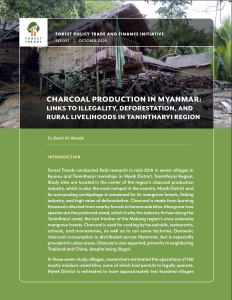 Charcoal Production in Myanmar: Links to Illegality, Deforestation, and Rural Livelihoods in Tanintharyi Region
Myanmar has the highest rate of mangrove loss in Southeast Asia, despite widespread recognition that these ecosystems are critical to protect local villages from coastal flooding. Charcoal production is a significant driver of mangrove deforestation in the country.   Forest Trends’ new data shows that the Myanmar Forest Department significantly underestimates the volume of mangrove[…] 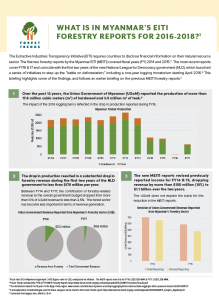 What is in Myanmar’s EITI Forestry Reports for 2016-2018?
The Extractive Industries Transparency Initiative (EITI) requires countries to disclose financial information on their natural resource sector. The Myanmar EITI (MEITI) was one of the few countries to disclose forestry data alongside mining and oil and gas. The most recent reports cover FY16 & 17, coinciding with the first two years of the new National[…] 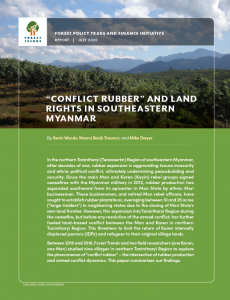 “Conflict Rubber” and Land Rights in Southeastern Myanmar
In the northern Tanintharyi (Tenasserim) Region of southeastern Myanmar, after decades of war, rubber expansion is aggravating tenure insecurity and ethnic political conflict, ultimately undermining peacebuilding and security. Since the main Mon and Karen (Kayin) rebel groups signed ceasefires with the Myanmar military in 2012, rubber production has expanded southward from its epicenter in Mon[…] 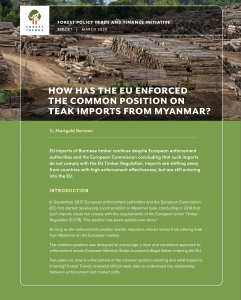 How has the EU enforced the common position on teak imports from Myanmar?
EU imports of Burmese timber continue despite European enforcement authorities and the European Commission concluding that such imports do not comply with the EU Timber Regulation. Imports are shifting away from countries with high enforcement effectiveness, but are still entering into the EU. 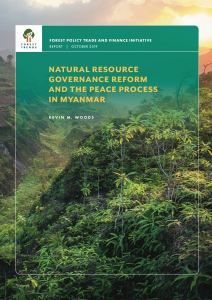 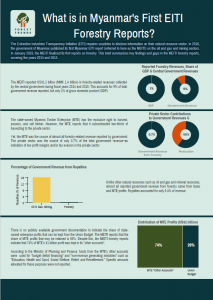 What is in Myanmar’s First EITI Forestry Reports?
The Extractive Industries Transparency Initiative (EITI) requires countries to disclose information on their natural resource sector. In 2016, the government of Myanmar published its first Myanmar EITI report (referred to here as the MEITI) on the oil and gas and mining sectors. In January 2019, the MEITI finalized its first reports on forestry. This brief […] 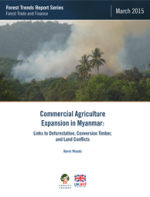 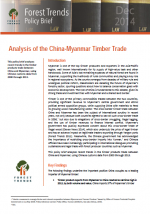 Analysis of the China-Myanmar Timber Trade
This policy brief analyzes recent trends in the timber products trade between China and Myanmar, using Chinese customs data from 2000 through 2013. Timber is one of the primary commodities traded between the two countries, providing significant revenue to Myanmar’s central government and ethnic political armed opposition groups, while supplying China with materials to feed […]