How have India’s imports from Myanmar changed since the 2021 coup?

On February 1st, 2021, the Myanmar military (known as the “Sit-tat”) launched a coup d’état against the newly re-elected government. Due in part to sanctions against the Sit-tat and the domestic conflict following the coup, Myanmar’s economy shrunk 18% in 2021 – one of the worst economic contractions in the world (World Bank 2022). Deprived of finance, the junta has increasingly relied on revenue from natural resources to support their operations and their ongoing campaign to retain power, which has included escalation of armed conflict and attacks on civilians.

While much international focus has been given to the revenues generated by the oil, gas, and mining sectors, the forest sector remains an important income source for the Sit-tat and associated entities. The EU, US, UK, Switzerland, and Canada have all sanctioned the Myanmar Timber Enterprise (MTE) (Forest Trends 2022), the State-owned Enterprise that runs Myanmar’s timber sector and maintains sole right to extract, sell, and export timber (Government of Myanmar 1989). In April 2022, the MTE itself announced a one-year moratorium on all logging throughout the country.

India, Myanmar’s neighbor to the west, has historically been either the first or second-largest importer of Myanmar timber. Therefore, the coup in Myanmar and resulting fallout has had a marked impact on Myanmar-India affairs, undermining India’s economic and security interests in Southeast Asia through which Myanmar was a key conduit. These relations are complicated. Fighting between the Sit-tat and opposing militias, including Ethnic Armed Organizations (EAOs) and People’s Defense Forces (PDFs), continues along Myanmar’s northwestern border with India, which is home to major timber trade routes.

This has triggered massive outmigration from Myanmar, with nearly 40,000 refugees remaining in India as of June 1, 2022 (UNHCR 2022). Despite these pressures, India has continued providing aid to the Sit-tat and maintains close ties (Ambarkhane and Gathia 2022). However, it aligns its official diplomatic position with that of the Association of Southeast Asian Nations (ASEAN), which has excluded Sit-tat representatives from high-level meetings while maintaining a non-interventionist stance (which can often be interpreted as tacit endorsement) (Strangio 2022).

Despite an overall drop in India’s timber imports from Myanmar since the coup, India remains a critical market for Myanmar, second only to China. Until June 2022, global markets have declared US$303 million in timber imports from Myanmar;[1] this is likely an underestimate as not all countries have up to date reporting. Over US$71 million, or 23% of the reported trade, has gone to India.

Trade to India had also dropped in the previous year, primarily due to the impact of COVID-19. Analysis of shipment-level data shows a 14% decrease in imports from Myanmar from 2020 to 2021. This is significant, but less so compared with a 37% drop the previous year (2020 compared to 2019), indicating that the initial onset of COVID-19 was more disruptive to the India-Myanmar timber trade than the coup. However, markets seem to be rebounding in 2022; from January to April 2022, India’s imports from Myanmar nearly doubled year-over-year, from US$13 million to US$24 million (Figure 1). 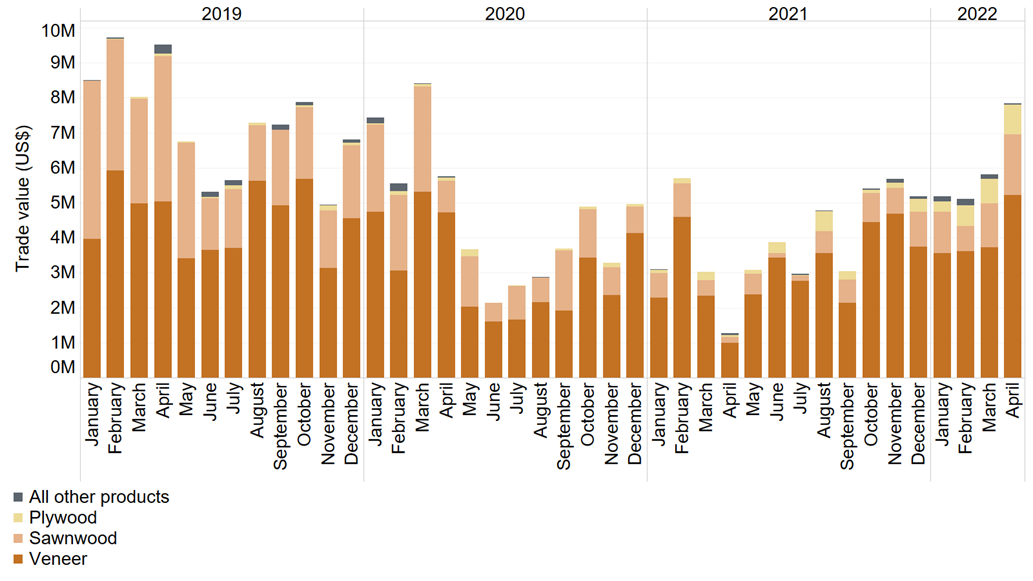 However, the product mix appears to be shifting within the Indian market, with a larger proportion of imports from Myanmar declared as plywood. In the two years leading up to the coup, roughly one-third of imports were in sawnwood form, and two-thirds in veneer, with plywood comprising just 1% of trade. In 2021, however, nearly 80% of imports were in veneer form, and plywood imports increased five times (albeit only to 5%), then doubled again in the January-April 2022 period (to c.10%) (Figure 2).

Figure 2: India’s imports from Myanmar by product, % of total, pre- and post-coup[2]

Species information gleaned from shipment data shows that nearly three quarters of India’s timber imports since the coup have been keruing (kanyin) (Dipterocarpus spp.), largely in veneer form. This is an increase since 2019-2020, where just over half of imports were keruing and a far more significant proportion, nearly two-thirds, were teak. Other significant species include pyinkado, often called Burma ironwood (Xylia xylocarpa), and rubberwood (Figures 3 and 4).

Figure 4: Proportion of India’s timber imports from Myanmar by species, pre- and post-coup

Reporting by Myanmar has been scarce since the coup, in part because Myanmar has been suspended from the Extractive Industries Transparency Initiative (EITI 2022). However, comparisons of Myanmar’s reported exports to India and India’s reported imports from Myanmar suggest illicit activity such as smuggling, misdeclaration, tariff evasion, or fraud. From February to November 2021, Myanmar’s Central Statistical Organization (CSO) reported US$3.91 million in exports to India, while India reported US$33.34 million in imports from Myanmar to UN COMTRADE – almost eight times more.

Furthermore, news outlets and social media have reported illicit trade on the border between India and Myanmar’s Chin State and Sagaing Region that has increased since the coup (Zalen News 2022a); in two days in March 2022, authorities reportedly seized almost US$3 million in illicit trade in forest products (Zalen News 2022). In July, there were four reported seizures of illegal Myanmar timber in West Bengal. Sources indicate that timber trafficked on this route is subsequently smuggled out of India to the Middle East, where Myanmar teak furniture remains in high demand (Telegraph Online 2022b).