Thailand has banned harvesting from natural forests since 1989 and there are no natural forest concessions. This means that the main source of timber is either from national plantations or imports. Domestic plantation-grown raw materials primarily include rubberwood and to a lesser extent eucalyptus. Thailand’s highly complex and ever-changing tenure systems create continuing challenges related to the legality of some plantation species, particularly rubberwood and eucalyptus. As such, the main legality risks for timber sourced from Thailand surround the legal right to harvest, that are rooted in unclear land tenure, illegal land documents, and infringements of the laws in licensed plantations. Illegalities related to harvesting activities, such as harvesting without a permit, illegal logging of protected species and in protected areas, and illegal trade and transport (e.g. incorrect identification of species during transport) have been reported particularly for high value redwoods such as Siamese rosewood. 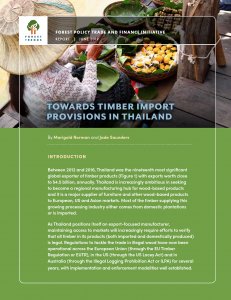 Towards Timber Import Provisions In Thailand
As Thailand positions itself an export-focused manufacturer, maintaining access to markets will increasingly require efforts to verify that all timber in its products (both imported and domestically produced) is legal. Regulations to tackle the trade in illegal wood have now been operational across the European Union (through the EU Timber Regulation or EUTR), in the[…]