Forest Trends recently published a new research brief describing results from a study investigating the potential contributions of pre-Incan water infiltration infrastructure for water security in the Andes. The study’s results show that indigenous solutions dating back 1,400 years that harness natural hydrological functions can help to secure water supplies for the downstream city of Lima.

Lima, Peru is the second-largest desert city in the world (the largest is Cairo). Located on Peru’s dry western coast, the city gets its water from rivers originating high in the Andes mountains. River flows vary season-to-season, with drought common during the months of May to November, followed by a spike in river levels between December and March.

For Lima, this means a pattern of large water deficits in its dry season. On the other hand, the city also experiences water surpluses during the rainy season. The city depends heavily on artificial storage for its water supplies, but this excess water is not fully captured for later use. Climate change is putting additional pressure on existing water resources, as are soil degradation and land use change in rural areas around the city.

This situation demands a rethinking of Lima’s current strategies to increase water security. The limitations of conventional solutions based on “gray” infrastructure like artificial dams and reservoirs are becoming apparent: they involve long-term investments, with high upfront (and often unrecoverable) costs.  These large-scale projects require complex planning and implementation. As an added challenge, uncertainties in future rainfall projections and water availability complicate the design of large fixed infrastructures systems with a long lifespan.

As a result, there is a great interest in Peru in nature-based solutions and “green” infrastructure, which can be gradually implemented, adjusted after implementation, and can provide several benefits that make them compatible with adapting to climate change. Pre-Incan systems for enhancing natural water infiltration are receiving increasing attention from conservation organisations and government agencies. These systems, which are often badly in need of maintenance, are known locally as mamanteo, the Spanish word for breastfeeding, or amunas, the Quechua word meaning “to retain.”

So far there is little evidence one way or another that these systems increase water security. This kind of evidence is necessary to incorporate nature-based solutions into an effective water resources management strategy.

The Natural Infrastructure for Water Security project recently convened a team to study one of the last intact pre-Incan systems for enhancing natural infiltration, located in the agropastoral community of Huamantanga in the province of Canta. This system was built at around an elevation of 3300 meters in the middle of the Peruvian Andes. 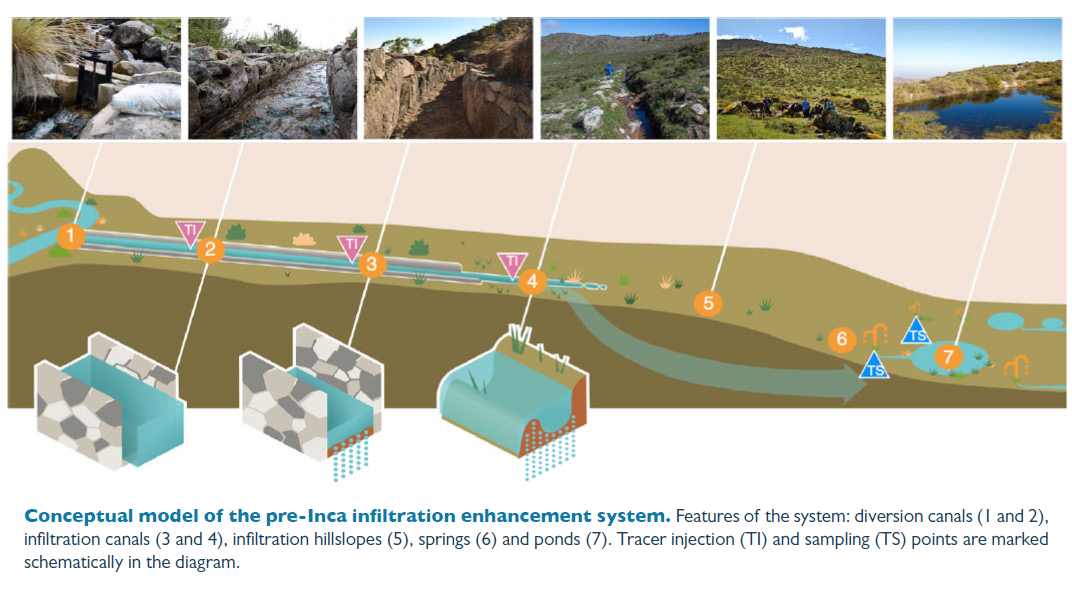 The infiltration system captures water during the rainy season (above 3800 meters above sea level) and channels it through ditches and canals to prime areas for natural infiltration into the soil. After it enters the ground, the water moves slowly downhill, later emerging in springs and streams. By extending the subsurface retention tine, these upslope infiltration systems have the effect of increasing the yield and the reliability of lower-elevation springs during the dry months.

A dye tracer was injected into an upstream diverting and infiltration canal, and its appearance or resurgence was monitored in downstream springs using active carbon samplers. The experiment revealed a clear hydrological connection between the canal and the springs, with an average retention time of the color tracer ranging from 2 weeks to 8 months, with an average of 45 days. These results show that the system can store water during the rainy season efficiently and recover it during part of the dry season. Modeling indicates that the infiltration system in Huamantanga can increase the natural flow of watercourses in the dry season between 3% and 554%.

These results suggest that scaling infiltration systems like Huamantanga’s could divert and infiltrate approximately 35% of the rainy season flow of the entire Rímac basin (198 million cubic meters of water per year). This would equate to an additional downstream flow of 99 million meters, which would increase the volume of water available to Lima during the dry season by an average of 7.5% per year and up to 33% during the first dry months.

The results of this investigation show that re-evaluation of indigenous knowledge, and traditional practices and systems, can complement engineering options to contribute to the challenge of supplying water to large urban populations located in dry or hydrologically variable regions, thereby improving water security and climate resilience.

For these reasons, SUNASS, the drinking water regulator of Peru, is currently incentivizing and supporting public water services providers in Lima and other cities that seek to complement traditional engineered infrastructure with nature-based solutions. Funded by a special water tariff regulated by SUNASS, water services providers in Peru have designed and implemented of a portfolio of watershed interventions across Peru. A recent law on Compensation Mechanisms for Ecosystem Services (2014) provides the legal framework and establishes permissible interventions. It also places special emphasis on the integration of scientific and indigenous knowledge, which includes the rehabilitation of water “sowing” and harvesting infrastructure such as the infiltration systems described in this brief.

This has led to a growing need to quantify the potential hydrological benefits of these practices and explicitly identify beneficiaries. A quantitative evidence base is an important prerequisite for combining grey and green infrastructure, and for optimizing cost-benefit ratios in the context of water supply and drought resilience. Given the current pressure from water stress, this study provides the scientific evidence necessary to scale indigenous infrastructure. It also challenges the preconception that local water management traditions are outdated.

This research was carried out by the project Mountain-EVO and the Natural Infrastructure for Water Security Project by researchers at Imperial College London, the Regional Initiative for Hydrological Monitoring of Andean Ecosystems (iMHEA), CONDESAN, SUNASS, FONAG, Forest Trends, Pontifical Catholic University of Peru, University of Birmingham, University Putra Malaysia, University of Leeds, and the Institute for Applied Sustainability Research.