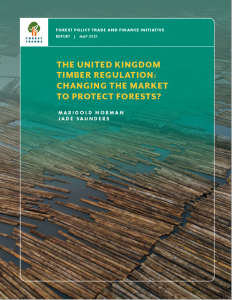 The European Union Timber Regulation (EUTR) came into force in 2013 to tackle illegal logging and drive demand for legally harvested timber products, by prohibiting the placement of illegally sourced timber on the European Union (EU) market. In the United Kingdom (UK), the EUTR came into force through the UK Timber and Timber Products (Placing on the Market) Regulations in the same year and was considered a key mechanism to help tackle global deforestation which is driving nature loss and climate change.

The EUTR was revolutionary in 2013: it was the first legal instrument at the EU level to require companies to undertake mandatory Due Diligence in their global supply chains, a concept that expanded the notion of corporate legal responsibility significantly. The Due Diligence requirements only applied to the first placer on the EU market (“Operator”) but covered the full timber supply chain. By requiring documentation back to point of origin in the forest, the law made companies responsible for knowing about the activities of timber producers in the forest and all sub-suppliers along the way, with whom many did not have a contractual relationship.

Since the EUTR came into force in 2013, guidelines for undertaking Due Diligence have been published by the European Commission (EC), as well as a number of Non-Governmental Organizations (NGOs), to help clarify expectations of importers with respect to EUTR compliance and ultimately, preventing illegal timber being placed on the European single market. These have included advice for assessing and mitigating the risk of importing illegal wood products, both generally and with respect to specific source countries. At the same time, expectations have also been set around the actions that Competent Authorities (CAs), responsible for the enforcement of the EUTR, should take to assess compliance with the EUTR.

After nearly eight years of implementation, this report explores the questions:

Answering these questions is important at a time when the UK’s exit from the EU presents an opportunity to take stock, learn lessons, and suggest potential new improvements. The UK government has committed to continuing to regulate imports of illegal timber in Great Britain through the Timber and Timber Products (Placing on the Market) Regulations (referred to as the UKTR for implementation in 2021 and beyond), while it continues to enforce the EUTR in Northern Ireland.

It is time to refine the ambition and to define new standards for responsible business which will place the UK firmly as a global leader in the regulation of not only illegal timber products, but also other products of illegal deforestation and their associated trade.