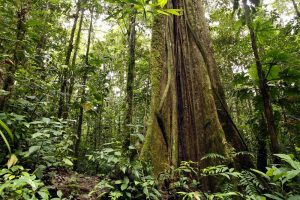 Indigenous people have contributed less to climate change than has any other segment of the population, yet they are among those most vulnerable to its impacts. At the same time, agriculture and forestry generate roughly 30 percent of all greenhouse gas emissions, while traditional land-management practices, such as agroforestry and permaculture, can dramatically improve the ability of forests, farms, and fields to absorb emissions. This has spawned the creation of a variety of mechanisms designed to support indigenous land stewardship. REDD+ is one of these mechanisms.
REDD+ stands for “Reducing Emissions from Deforestation and Degradation, plus conservation, sustainable management of forests, and enhancement of forest carbon stocks,” and in the strictest sense it refers to a specific set of mechanisms created under the United Nations Framework on Climate Change (UNFCCC) and enshrined in the 2015 Paris Climate Agreement.

The Surui Forest Carbon Project was launched in 2009 by the Paiter-Surui indigenous people of the Brazilian Amazon, with technical support from Forest Trends’ Communities Initiative and other partners. Project developers sought to use carbon finance to support sustainable land management within the Paiter-Surui homeland, the Sete de Setembro Indigenous Territory. They hoped ultimately that the project could “nest” within larger programs that would evolve under the UNFCCC, meaning that its outcomes would be included in Brazil’s carbon accounting.

The Surui Forest Carbon Project was the first indigenous-led conservation project financed through the sale of carbon offsets. It dramatically reduced deforestation within the territory during its first five years of operation (2009-2014), but was suspended in 2018 after the discovery of large gold deposits in the territory sparked a surge in deforestation.
Before being suspended, the project generated 299,895 carbon offsets certified under the Verified Carbon Standard (VCS), with each offset representing the equivalent of one metric ton of carbon dioxide kept out of the atmosphere. The project also became the first VCS-certified project to receive a Gold certification from the Climate, Community & Biodiversity Alliance, which evaluates social and environmental benefits beyond carbon. The Paiter-Surui used proceeds from offset sales to finance six sustainable community development initiatives that generate income and support traditional practices, such as the harvesting of medicinal plants, the creation of artisanal handicrafts, and other activities that enable indigenous peoples to live off the land while maintaining the forest.

In this case study, we first offer a brief history of the Paiter-Surui people, which sets the stage for a history of the project itself. We then provide an analysis of the challenges the project faces to this day, and implications for implementing REDD+ in other contexts.