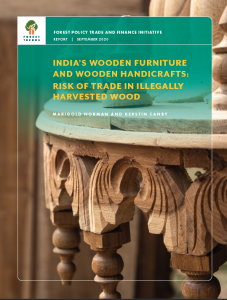 This report document’s India’s role in the global timber supply chain, with a particular focus on the extent to which India’s furniture and handicrafts industries’ high demand for wood products from around the world may be driving India’s imports of illegally harvested wood.

India’s rapidly expanding furniture manufacturing industries are setting their sights on close competitors in China and Vietnam, expanding their networks into the lucrative markets in Europe and North America. Large companies as well as millions of small-scale enterprises and artisanal shops now export more than US$1 billion of timber products, an increase of 138% since 2010. At the same time, they are also providing for India’s own growing urban population, with increasing amounts of disposable income, are purchasing more furniture and wooden handicrafts than ever before.

Where does the wood come from to supply these manufacturers?

Like China and Vietnam, India’s industries are importing vast amounts of timber from all over the world because they cannot procure enough timber from their national forests which have either been depleted of natural forests, or have been set aside in national parks or reserves. Despite massive governmental programs to increase forestry production in India, much of it goes to India’s poor rural population which continues to need fuelwood for heating and cooking.

Is the wood coming from sustainable or even legal forest lands? Why would India’s imports of illegally harvested wood matter to Indian manufacturers, the Indian government, or those buying goods manufactured in India?

This report summarizes India’s domestic and imported timber flows into and out of the country and its manufacturing industry. In particular, the report focuses on exports to key markets such as the US, Europe, Australia, Japan and the Republic of Korea, which now have regulations that prohibit the import of illegally sourced wood, even if the illegalities took place in the very early stages of the supply chain – not in India, but in countries of origin in Africa or Southeast Asia. Indian manufacturers have little experience with the verification systems needed to guarantee that their products are legal, making them and their buyers vulnerable to legal action. The analysis in the report assesses the risk that they are taking, based on species and likely countries of origin. Detailed shipment record data for India’s imports and exports were assessed to determine the extent to which high-risk or Indian-grown species are being used in the manufacture of furniture and wooden handicrafts exported to these regulated markets.

This report is a first report in a series focusing on India’s role in the global timber supply chain, with a particular focus on the extent to which India’s high demand for wood products from around the world may be driving illegal deforestation and therefore contributing to loss of global biodiversity and increasing carbon emissions driving climate change. It complements similar work in China and Vietnam, where Forest Trends has used “research-based policy advocacy” to influence government and industry perspectives.