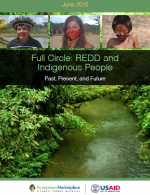 Past, Present, and Future

Indigenous people have managed their land sustainably for hundreds of years. They have, as a result, contributed the least to climate change and have even prevented large amounts of
carbon from being released into the atmosphere through forest clearing and degradation. However, unless something
changes soon, they will suffer the most from its consequences. If that happens, their suffering will become our suffering as forests degrade and disappear, releasing billions of tons of carbon dioxide into the atmosphere.

That’s why environmental NGOs created REDD – a set of activities that harness carbon finance to save endangered rainforest and slow climate change by Reducing Emissions from Deforestation and Degradation. REDD initiatives generally work by supporting sustainable land-use practices. Over the last 27 years, REDD activities have grown to include sustainable agroforestry, forest patrols, and the support of indigenous Life Plans – but the
underlying premise is always the same: living forests provide a bulwark against climate change, and we should all work to save them.
Thanks to REDD, companies, governments, and individuals have invested billions in conservation over the last quarter century, and now the concept has been incorporated into the United Nations Framework, where REDD is called REDD+ to reflect the specific blend of recognized outcomes. Now that REDD+ is part of the UN process,
governments around the world have pledged more than $7 billion through the end of this year, and that amount is sure to grow. But few outside the environmental community know what how REDD works or what its aims and limitations are.

Because of the growing role that indigenous people play in REDD, Forest Trends has pulled together these 6 recent articles from its online information portal Ecosystem Marketplace. All 6 appeared in the first half of this year, and together they offer an accessible glimpse into this fascinating but often challenging sector.