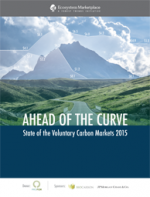 State of the Voluntary Carbon Markets 2015

Ahead of the Curve

June 3, 2015 | Washington, D.C. | Companies, governments, and individuals voluntarily spent just under $4.5 billion on conservation and clean energy over the past decade by purchasing nearly 1 billion carbon offsets, finds a new report released on the sidelines of this week’s international climate talks in Bonn, Germany.

The Forest Trends Ecosystem Marketplace report, Ahead of the Curve: State of the Voluntary Carbon Markets 2015, demonstrates that voluntary demand for carbon offsets – each representing a one-tonne reduction in greenhouse gases that compensates for emissions elsewhere – is impactful well beyond the markets’ relatively small size.

The voluntary markets have served as the testing ground for compliance carbon pricing programs all over the globe. South Africa, for example, will allow offsets generated under two well-known voluntary carbon market standards when the country implements its carbon tax in 2016. The forestry, ozone-depleting substances, and coal and livestock methane offset projects now eligible for California’s carbon cap-and-trade program have their roots in the voluntary markets.
The pricing of voluntary carbon offsets has experienced peaks and valleys over the last decade. The global average price peaked at $7.3/tonne in 2008 as momentum appeared to be building toward the United States implementing a national cap-and-trade system to reduce these emissions. But prices generally began to decline as carbon trading legislation faltered in the U.S. Senate and nations failed to ratify another phase of the Kyoto Protocol, eventually reaching an all-time low of $3.8/tonne in 2014.

Voluntary carbon offsetting can take on various forms, including saving endangered rainforest, distributing clean-burning cookstoves in developing countries, installing renewable energy systems, restoring mangroves and cultivating low-carbon rice production. From year to year, the project type most in demand has changed, driven by policy signals and supply-demand fundamentals, according to Ecosystem Marketplace, which has tracked these activities since 2007. Wind projects topped the charts in 2011 and 2012 due to their relative cost-effectiveness compared to other project types, but have since been overtaken by avoided deforestation (REDD) offsets, which traded an all-time high of 25 million tonnes in 2014.

A few countries expected to play critical roles in the international climate talks have received the largest sums of voluntary financing of carbon offset projects, according to the report. Over the last decade, the United States experienced the largest volume of voluntary offset transactions (136 million tonnes of offsets valued at nearly $700 million), followed by Brazil (40 million tonnes valued at $233 million).

The role of the voluntary carbon markets is inextricably linked to the global climate talks as the up and down cycles these markets have experienced over the past decade have been driven in large part by policy signals – or the lack there of. But the progressive actions of voluntary buyers can also inform and shape the international negotiations, as they have at the national and subnational levels, the Ecosystem Marketplace report demonstrates.

Thank you to the donor, sponsors, and supporter of this report. 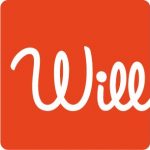 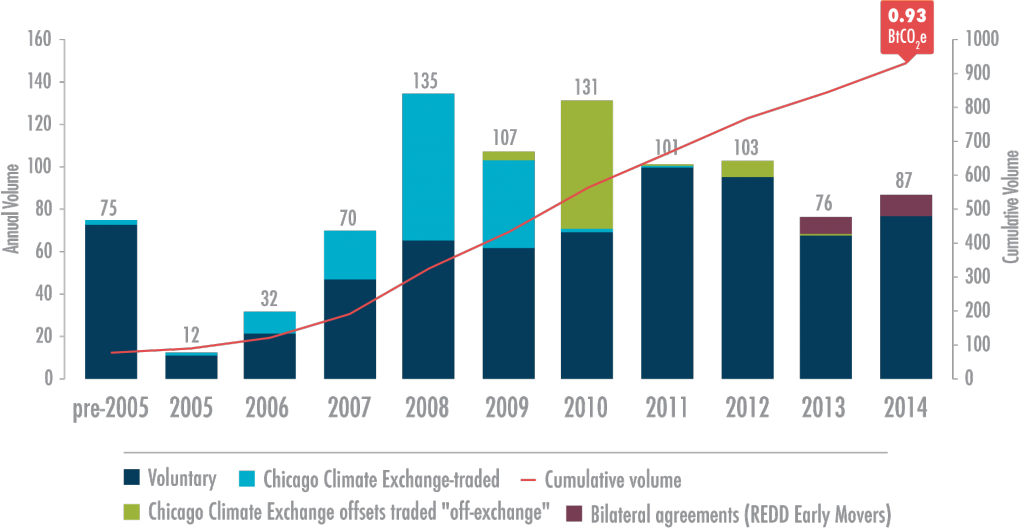