New Report Tracks the Impact of Forest Finance in Brazil

Brazil has been recognized as a leader in global efforts to reduce deforestation and associated greenhouse gas emissions—mostly due to the successful implementation of forest conservation policies that reduced deforestation in the Amazon by 80% below historical levels, and prevented more than 5 billion tons of CO2 from reaching the atmosphere over the last decade. Brazil showed that the policy known as Reducing Emissions from Deforestation and Forest Degradation (REDD+), could work in practice. Unfortunately, since 2016, deforestation levels in Brazil have started to rise again. What happened?

During the past two years, the combination of an economic crisis and political instability in Brazil has dramatically increased deforestation which rose 24% in 2015 and 25% in 2016. Economic woes led the government to drastically cut the budget for forest protection activities. To make matters worse, the Federal government promoted policies that encourage deforestation, including stopping efforts to mark the borders of indigenous lands in the Amazon, dismantled FUNAI (the federal organization for indigenous issues), and effectively removing protections of those areas of the country that have the lowest deforestation rates, indigenous people’s lands. The government also curtailed  environmental licensing and reduced rules of land regularization on Amazon. 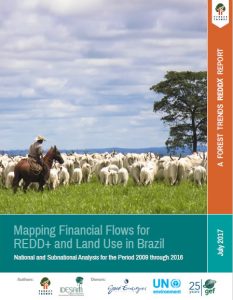 A new report “Mapping REDD+ and Land Use Financial Flows in Brazil” by research organizations Forest Trends and IDESAM shows how over US$2.2 billion in REDD+ funds have been used by Brazil to implement deforestation policies, and highlights new ways to make these investments more effective at reducing emissions, including by making payments directly available to the stakeholders who are implementing the deforestation policies such as subnational governments, farmers, local communities and indigenous Peoples of the Amazon. Our study shows that too much REDD+ funding is still being used for preliminary ground work (REDD+ Readiness activities) such as strengthening public institutions and stakeholder engagement. The study also examines the investments in REDD+ and land use at the state level, particularly Amazonas and Acre, two states that have been most strategic and most successful in their efforts to conserve forests and mitigate climate change.

One of our key findings is that it is critical that Brazil move to the more advanced stages of REDD+, with a special focus on results-based payments. After all, the goal of the REDD+ mechanism is to “slow, halt and reverse forest cover loss and the related emissions”, and countries that reduce emissions need to receive compensation for doing so. In a preliminary analysis, the study shows that $80 million is earmarked for promoting low-carbon agriculture in the Amazon. While this is a positive signal that new policies that can provide economic benefits for low-carbon methods are being implemented, estimates indicate that Brazil’s total public agriculture finance is around $55 billion annually, dwarfing the $2 billion that has been spent on REDD+ in Brazil.

Also, while the voluntary efforts of the private sector, particularly from companies committed to zero deforestation in their supply chains, as well as state and federal level climate policies, are laudable, a better alignment of public and private sector (in particular in the agribusiness) is necessary to integrate agricultural expansion and forest conservation activities.

To keep forests standing and forest policies requires investments in policies that can stop deforestation, as well as on compensating actors who are no longer deforesting. Since most countries with tropical forests do not have sufficient funds to support these efforts, many rely on international funding from donor countries under the umbrella of REDD+ to complement their own investments. However, most of the recent funding for forest projects in Brazil has come from the country’s own state and federal public funds. In contrast, REDD+ funding—which has long been a major pillar of forest protection in the Amazon region—has been insufficient for the country to maintain its long-term forest conservation efforts.

The resulting increased deforestation recently prompted Norway, the main donor to the Amazon Fund, to announce it will reduce the payments into the Brazilian Fund, since the rules of the Fund clearly mandate that a country does not get paid if it fails to achieve its deforestation targets. However, up until Norway’s announcement, the funding Brazil received through the Amazon Fund was already below the expected level. The new report by Forest Trends and Idesam shows that between 2009 and September 2016, the Brazilian Fund has received about $1.307 billion (equivalent to R$ 2.52 billion) which does not even represent 10% of Brazil’s emissions reduction potential – estimated at 5.5 billion tCO2 or US$26 billion.

We also find that Brazilian states need to be better rewarded for being the primary agents in implementing and enforcing forest policies. The Amazon states – which have contributed the most to Brazil’s emission reductions over the last decade– received only 9% of the entire $2.2 billion, and have therefore depended on their limited public budgets, that have decreased progressively over the last 3 years. That combined with emission reductions that have not yet been paid for (nearly US$26 billion if all of Brazil’s emissions reductions could be paid for), opens a window of opportunity to mobilize REDD+ funding at the subnational level. To achieve this, states will require greater autonomy in directly receiving international finance, as well as attracting new investors from the private sector.

Our message is clear: to get back on its trajectory of reducing deforestation, Brazil must increase and diversify finance resources beyond its reliance on the Amazon Fund.

More information on the REDDX – REDD Expenditures Tracking Initiative can be found on this link, and the complete study with analyses and recommendations can be accessed here.

More information on IDESAM can be found here.