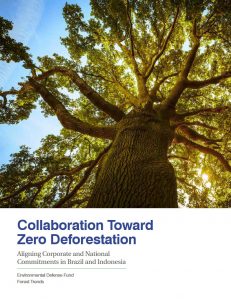 The report presents case studies that explore the ways in which companies and governments are collaborating, and highlights recommendations for how this collaboration could be strengthened — with implications not only for the two focal countries of Brazil and Indonesia, but for tropical forest countries worldwide. Aligning corporate commitments and Nationally Determined Contributions (NDCs) – official climate action plans submitted by parties of the Paris Agreement – is of critical importance to meeting national deforestation reduction and reforestation goals. Collaboration between companies and governments will not only enable each sector to achieve their respective deforestation reduction goals, but will also pave the way for future partnerships and enhanced action.

Need and opportunity for public-private partnership

Deforestation continues to account for around 15% of global greenhouse gas emissions, while destroying biodiversity and threatening livelihoods. In 2014, Brazil and Indonesia together accounted for 38% of global tropical deforestation—with the majority of deforestation in each country driven by commercial agriculture.

Many companies and governments have committed to reduce deforestation. As of early 2017, 447 companies have made commitments to reduce deforestation in their supply chains, according to research by Forest Trends’ Supply Change initiative. Concurrently, of the 191 countries that submitted Nationally Determined Contributions (NDCs) to the United Nations Framework Convention on Climate Change (UNFCCC), an estimated 80% included plans to address the land sector in their mitigation targets.

Collaboration between these two sectors is essential: corporations need a regulatory and policy environment conducive to their reduced deforestation commitments—which governments can provide; and governments would benefit tremendously from the participation of key corporate actors in order to achieve the reduced deforestation and forest landscape restoration goals put forth in their NDCs.

Brazil’s  NDC aims to reduce emissions 37% below 2005 levels by 2025, and 43% below 2005 levels by 2030—and outlines the role that reducing deforestation and increasing forest landscape restoration could play to achieve these emission reduction targets. Many companies with operations in Brazil developed zero deforestation commitments and are collaborating with the government and NGOs in multi-stakeholder initiatives such as Mato Grosso’s Produce, Conserve, Include (PCI) program. The PCI aims to reduce deforestation, increase reforestation, and increase sustainable agricultural and livestock production—all goals that align with Brazil’s NDC. Companies including Marfrig and Amaggi have signed on to this initiative and are contributing to the design, implementation, and mobilization of finance to support the PCI. Another PCI participant, the Sustainable Trade Initiative (IDH), created a de-risking fund to increase cattle intensification and reforestation. Through interactions via the PCI and other partnerships, the private sector is supporting the government to accelerate the implementation of the country’s NDC goals, and revealing the ways in which these collaborations can be scaled-up and amplified throughout the country.

The government of Indonesia, in addition to enacting several policies focusing on peatland and forest conservation and restoration, has made an unconditional commitment in its NDC to reduce emissions 29% below business-as-usual (BAU) estimated emissions by 2030, and a conditional commitment—contingent upon international support, including finance—to reduce emissions 41% below BAU by 2030. Meanwhile, companies committed to reducing deforestation in their supply chains have made No Deforestation, No Peat, No Exploitation (NDPE) commitments of their own. Many of these companies are collaborating with subnational governments in jurisdictional, multi-stakeholder initiatives aimed at achieving their shared goals of reducing deforestation. The Central Kalimantan Jurisdictional Commitment to Sustainable Palm Oil is one of the most advanced public-private collaborations to address deforestation and emissions in Indonesia, and is bringing together representatives from local governments, NGOs, indigenous peoples, smallholder farmers, and oil palm growers and buyers toward the goal of certifying all palm oil produced in the province by 2019—with Unilever as a particularly active private sector participant.

Lessons from Brazil and Indonesia show that corporate zero deforestation commitments—when buttressed by strong government policies and enhanced by multi-stakeholder partnerships—can help countries reach their goals of reducing deforestation and enhancing forest landscape restoration. This type of collaboration is of increasing importance and has come to the fore in countries such as the United States, where businesses and local and state governments are teaming up to uphold the spirit of the country’s Paris Agreement pledge, despite the US federal government’s announcement to leave the Agreement.

Based on the findings of the report, companies and governments from tropical forest countries worldwide should consider the following recommendations to promote more effective public-private partnerships toward reducing deforestation: