With the world’s attention trained on climate as governments begin ratifying the Paris Agreement in greater numbers, more and more companies are stepping up to the plate to do their part by minimizing the harmful impact of their operations on the world’s most crucial carbon sponges – forests. The newest report from Forest Trends’ Supply Change project – Tracking Corporate Commitments to Deforesation-free Supply Chains, 2016 – tracks progress on 579 corporate commitments to reduce forest destruction tied to the “big four” agricultural commodities – palm oil, wood products, soy, and cattle; that’s nearly double the number we first identified in March 2015.

But are all commitments created equal? What exactly do these pledges cover, and how can consumers, nongovernmental organizations, and other stakeholders assess their impact? Can they truly put global businesses on a path toward deforestation-free supply chains?

These were just a few of the big questions the Supply Change team tackled in a webinar coinciding with the new report, which was co-hosted by the Innovation Forum. Joining us on the panel were Jillian Gladstone of CDP North America, Marco Albani of Tropical Forest Alliance 2020, Ignacio Gavilan of the Consumer Goods Forum, and Tobias Webb of Innovation Forum.

We fielded some great questions from an engaging audience of over 300 attendees, but we ran out of time to address many more. To close the loop and shed more light on these urgent issues, the Supply Change team has put together a comprehensive Q&A to answer over 30 questions that we couldn’t answer during the webinar. You can download the full document here, and read an excerpted selection below:

What percentage of global trade is covered by these commitments?

There is currently insufficient publicly available information on the percentage of global trade that is covered by all of these commitments. However, we do know the percentage of global trade that is certified. We note on page 8 of our report: “Around 21% of global palm production* is certified under the Roundtable on Sustainable Palm Oil (RSPO), and 10 to 15% of managed forest area – mostly non-tropical – is certified under the Forest Stewardship Council (FSC) and/or the Programme for the Endorsement of Forest Certifications (PEFC). By contrast, the Round Table for Responsible Soy (RTRS) covers less than 1% of global soy production despite having a globally recognized certification scheme. Cattle product supply chains lack an industry-supported, comprehensive global standard. The Leather Working Group (LWG) audits a little over 10% of global leather production.”

Please note that the RSPO revised the percent of global certified palm oil production downward to 17% in 2016.

What’s an example of an under-documented experience in the agriculture sector – either a success or failure – that is particularly notable?

One action deserving of recognition is when a company goes beyond their direct soy footprint to also assess their indirect footprint. New tools have been emerging to assist companies with this process – most notably Consumer Goods Forum’s soy measurement ladder. An example of a company that has undertaken this process is the Danish company Arla; their commitment reads “all soy fed to cows producing milk for Arla Foods is grown according to RTRS principles and criteria or equivalent no later than 2015.

Companies that have commitments and appear to be implementing them may have certified only a small part of their production or sales. Their tactics might reasonably be deemed “Greenwashing.” What steps have you taken to reflect this in your analysis?

Let’s first begin by saying that no two commitments are created equal. They’re often widely disparate, even across the same industry. Even if commitments are worded identically, they have different implications based on the size of the company and the areas in which it operates.

As you suggest, some commitments can be relatively weak. And, although the Supply Change platform doesn’t assess commitments, it does collect and present information that a user can use to decide whether a commitment is legitimate or a “green wash.” One endeavor we have undertaken is to integrate the results of 12 assessments from a variety of organizations such as WWF, Global Canopy Programme, CDP, the Union of Concerned Scientists, and more. To our knowledge, Supply-Change.org is the only database where a user can see a cross-listed set of scores for a given company; Unilever, for example, has seven different assessment scores posted to its profile.

To address the scenario described in the question above, we’ve sought to address such volume disparities by including data for both total volume and compliant volume. Unfortunately, we have limited sources from which to collect this data, and have primarily been sourcing it through public disclosures to CDP Forests and the RSPO’s Annual Communication of Progress (ACOP). An example of a company with healthy volume data on its profile is Brambles. 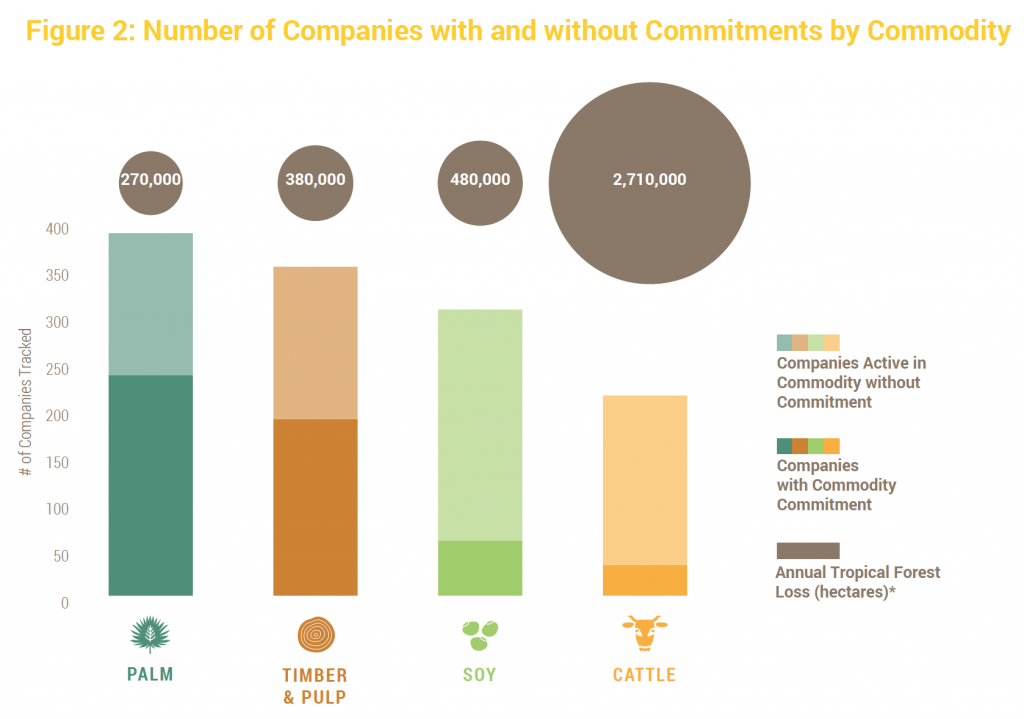 To what extent and how have tropical country governments and international companies collaborated on zero deforestation?

Calls for zero-deforestation commitments have received mixed reception among national and regional governments and among companies, but there are some notable success stories.

In 2009 in the Brazilian state of Pará, for example, nonprofits and the Federal Public Prosecutor’s office pressured meatpackers and their buyers to reduce illegal deforestation associated with their cattle use. As a result, JBS and three of the other largest meatpackers in Brazil committed only to source from cattle suppliers who are not associated with illegal deforestation or exploitation and who have registered their property under national government’s Rural Environmental Registry (CAR).

The companies relied on different government agencies for meeting their commitments. The government’s National Institute for Space Research provided deforestation maps vital for the companies to monitor their suppliers. Similarly, the companies relied on lists of suppliers associated with exploitation provided by the Ministry of Labor and Employment for further screening potential cattle sellers. At the same time, the requirement that all suppliers for these companies register their land in the CAR has in turn has helped the regional and national Brazilian government expand this program, which is vital for implementing the National Forest Law. Ultimately, the establishment and implementation of the zero-deforestation cattle agreements and implementation of the National Forest Law in Brazil provides an example of mixed confrontation and collaboration ultimately resulting in reductions in deforestation.

Can the panel share their thoughts on how important they see jurisdictional or “landscape” approaches as a solution to meeting commitments?

Jurisdictional and landscape-level approaches for commodity sourcing pose an exciting new frontier for meeting corporate zero-deforestation commitments. Back at the United Nations climate conference in Paris last December, the co-chairs of the Consumer Goods Forum, Unilever, and Marks and Spencer pledged to establish preferential sourcing of commodities from jurisdictions that have high levels of support for ambitious deforestation prevention plans. These requirements include jurisdictional plans to reduce emissions from forests, monitor and control greenhouse gases, and uphold environmental and social safeguards.

By design these agreements will, through collective purchasing power, increase the leverage of corporate buyers to ensure access to commodity supplies that meet their sustainability procurement commitments. Jurisdiction or landscape level approaches in theory should reward sustainably producing jurisdictions with business and make land use planning more efficient as production is diverted to previously degraded lands.

In 2016, Unilever and Marks and Spencer plan to convince more companies to sign on to this agreement. More corporate support will be vital for this demand-side pledge to gain momentum.

On the supply side, more public sector coordination and leadership is needed. Several different jurisdictions have stepped up to the plate – committing to only produce certified commodities within their territories – including Sabah (Malaysia), Central Kalimantan (Indonesia), and Mato Grosso (Brazil).