After a decade of international, UN-organized efforts to combat deforestation through finance for forest protection, the million dollar question is whether that finance is reaching the tropical forest countries that need it most. When Forest Trends set out to answer that question for the first time, it found encouraging signs that the $10 billion in funding committed through 2015 under the program known as Reducing Emissions from Deforestation and forest Degradation (REDD+) is, in fact, going to the right places.

Of this money, our analysis examined nearly $6 billion in REDD+ finance pledged to 10 key countries, and confirmed that these funds are successfully targeting nations and provinces with high levels of deforestation and associated carbon emissions.

The new report from Forest Trends’ REDDX (REDD eXpenditures) initiative, which I co-authored with Michael Wolosin of Forest Climate Analytics and my colleague Jessica Breitfeller of Forest Trends, represents the most comprehensive analysis to date of the “geography” of REDD+ funding. This research is the first to ever combine detailed information on REDD+ finance flows with forest cover, deforestation, and emissions data from the World Resources Institute’s (WRI) Global Forest Watch (GFW) satellite monitoring system.

In our analysis, “The Geography of REDD+ Finance: Deforestation, Emissions, and the Targeting of Forest Conservation Finance,” we track REDD+ financing from 2009 to mid-2016 and forest loss (also known as deforestation) statistics from 2001 to 2014, the last year for which complete forest loss data is available. We uncovered $5.9 billion in total finance that has been committed or pledged to support REDD+ programs across 10 countries in Latin America, Africa, and Asia-Pacific. Of the total finance tracked, $2.9 billion was directed towards national-level REDD+ readiness initiatives, while $3 billion was earmarked for subnational initiatives targeting specific geographic regions or provinces within a country.

1) In general, REDD+ finance is being targeted to countries and provinces demonstrating strong political commitment to tropical forest protection.

Countries that have put forth ambitious national climate plans (NDCs) and demonstrated a high level of political commitment to reducing deforestation are generally receiving more REDD+ finance than countries whose REDD+ efforts are progressing more slowly. The same is true for subnational provinces – those demonstrating leadership and commitment to REDD+ goals tended to receive more funding than those that did not.

2) REDD+ finance at both the national and subnational level strongly correlates to emissions and forest loss, although the details of that relationship differ across countries.

Forest loss and deforestation emissions are both fairly predictive of how much REDD+ finance a country or province will receive (see finding #3 below). However, there is some variation in this trend across countries at the provincial level. For example, subnational REDD+ funding rises more quickly as a function of emissions in Brazil, Ghana, and Mexico, but much more slowly in Liberia, Tanzania, and DRC. This indicates that subnational REDD+ finance in the latter three countries is more evenly distributed across each country’s provinces, regardless of emissions, whereas this finance is more closely tied to emissions in Brazil, Ghana, and Mexico. 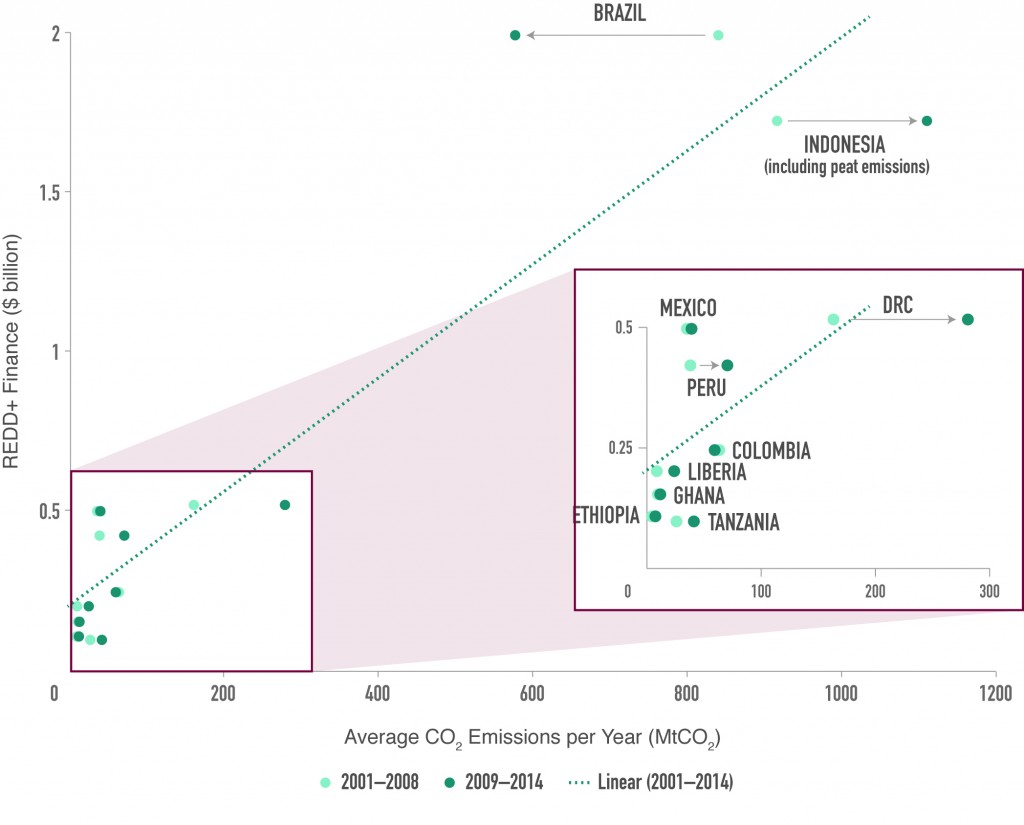 3) Donors may be prioritizing REDD+ finance toward areas facing acute deforestation pressures, where it is needed most, rather than equally targeting all areas with high forest cover.

Our statistical models show that differences in the amount of REDD+ finance going to the 10 countries and their various provinces were better predicted by deforestation area and deforestation emissions than by forest cover. This tells us that donors are deciding where to send their REDD+ money based primarily upon how much forest is being lost in various places, and less by how much total forest area exists in those places. Donors thus appear more eager to prioritize avoiding imminent forest loss over conserving standing forests that may be less threatened.

More specifically, at the national level, deforestation area and emissions predicted about 90% of REDD+ finance to each country, while total forest cover predicted about 70% of finance. This same pattern appeared at the subnational level across all 221 provinces in the 10 countries, although the disparity narrowed to 62% vs. 53%, respectively.

Our model estimate across the 10 countries shows that on average, a country with zero emissions can expect to receive about $32 million/year in REDD+ finance (95% Confidence Interval: $3.6-$61 million). This predicted baseline amount of finance, which is independent of emissions, might be indicative of the fixed costs of participating in REDD+, including activities such as capacity building, program design, and pilot implementation. The wide confidence interval of this estimate indicates that REDD+ readiness investments will necessarily vary, given the divergent circumstances present in each of the 10 countries.

Our model also shows that on top of the baseline average of $32 million/year, countries can expect to receive $308,000/year for every additional million tons of average annual deforestation emissions. This suggests that annual REDD+ finance per ton of emissions decreases as emissions increase; in other words, a country with higher emissions should not expect the same level of REDD+ finance on a per-ton basis as a country with lower emissions. This may be due to the greater economies of scale that REDD+ finance is able to achieve in larger countries or to the fact that much of the REDD+ finance on offer thus far has been for capacity building and other up-front costs, which are not directly tied to emissions. As future REDD+ finance increasingly goes to fund verified emissions reductions, we should expect to see funding increasingly allocated to countries with larger forest areas and more potential for emissions reductions from avoided deforestation.

However, other factors beyond deforestation and emissions also seem to be influencing donor decisions about where to allocate REDD+ funding. When we compared the funding received by each country with the model-predicted funding that each country could expect to receive based on its emissions, Mexico, Brazil, and Peru received more funding than expected, while Tanzania, Ethiopia, and Ghana received less. While this could be due to a number of factors, donor perceptions about governance and implementation capacity may be playing a role in shaping this trend.

5) Individual provinces that have demonstrated high levels of commitment and capacity are more often participating in jurisdictional REDD+ (J-REDD) programs and therefore tend to receive significantly more funding per hectare of forest cover, forest cover loss, and ton of emissions than provinces not in these J-REDD pipelines.

The study measured REDD+ funding pledged to the 32 provinces enrolled in J-REDD programs, such as the Governors’ Climate and Forest Task Force (GCF), the Forest Carbon Partnership Facility (FCPF) Carbon Fund, the BioCarbon Fund Initiative for Sustainable Forest Landscapes (ISFL), and the REDD Early Movers (REM) program. It then compared this funding to that received by the other 189 provinces not enrolled in these J-REDD programs.

We found that states and provinces that enroll in a J-REDD program – thus committing themselves to investing the time, energy, and public resources necessary to identify their major deforestation drivers and put together a political road map to address them – receive three to five times more REDD+ finance than they would have if they had not enrolled in a J-REDD program.

6) Provinces and regions facing civil conflict or with weak governance and political institutions often receive comparatively less funding, even in the presence of high deforestation rates.

For example, certain regions within both Mexico and Colombia are associated with high levels of illegality and illicit drug trade that are in some cases contributing to increased levels of deforestation. Yet our study shows that provinces within these areas are not receiving high levels of subnational funding.

In the case of Colombia, specifically, provinces within the eastern ecoregion of Orinoquía have attracted relatively limited finance, despite having some of the highest deforestation rates in the country. This is likely due to the difficult realities of implementing REDD+ in areas plagued by weak governance and conflict. However, within the context of the country’s current peace-building agenda, rural development within the region has become a high priority for the Colombian government. International donors – through the World Bank BioCarbon Fund ISFL – are supporting this agenda and have pledged $65 million in an attempt to partner with the Colombian government to create a low-emissions development plan for Orinoquía.

One of the key policy recommendations that emerges from this analysis is that much more REDD+ finance is needed to turn the tide of global deforestation and to maximize the potential for REDD+ to mitigate climate change. Total REDD+ finance pledged across the 10 countries from 2009 through 2014 averages out to less than $1 per metric ton of deforestation emissions over the same period. This is a far cry from the $5/ton being held out by donors as a provisional price signal for REDD+ tons within the FCPF Carbon Fund. If donors want to maximize the role that forest conservation can play in global climate change mitigation efforts, much more finance is needed. 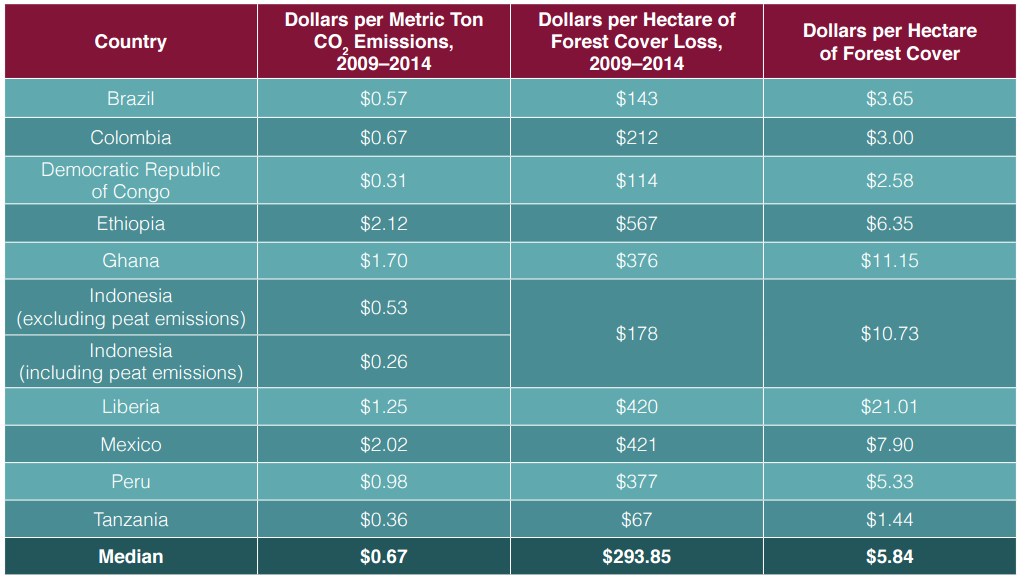 Donor governments will not be able to provide sufficient finance over the long term to end global deforestation. In the short term, their funding can ensure that REDD+ progress continues, but for REDD+ to be successful, the private sector must also step up and play a constructive role in financing forest conservation, as described in a recent Forest Trends report by my colleague Gus Silva-Chávez and his co-author Peter Graham. Their report explores the policy tools governments can use to incentivize the private sector to act – and to ensure that more REDD+ money goes to the right places.