How REDD+ Can Help Countries Recovering from Armed Conflict

For almost all forest-rich countries, a major impediment in reversing patterns of deforestation has been weak institutions that have weak rule of law. That becomes an even greater obstacle in countries with a history of armed conflict.

A new Forest Trends analysis of countries supported by the U.N.’s Reducing Emissions from Deforestation and forest Degradation (REDD+) program finds that, since the first REDD+ commitments were announced in Bali in 2007, more than half of participating countries have experienced organized armed conflict. The same is true for countries supported by the REDD+ programs hosted by the World Bank: the Forest Carbon Partnership Facility, and the Forest Investment Program. These findings (summarized in the figure below; click to enlarge) will be presented at the Oslo REDD Exchange in Norway on June 14, 2016. 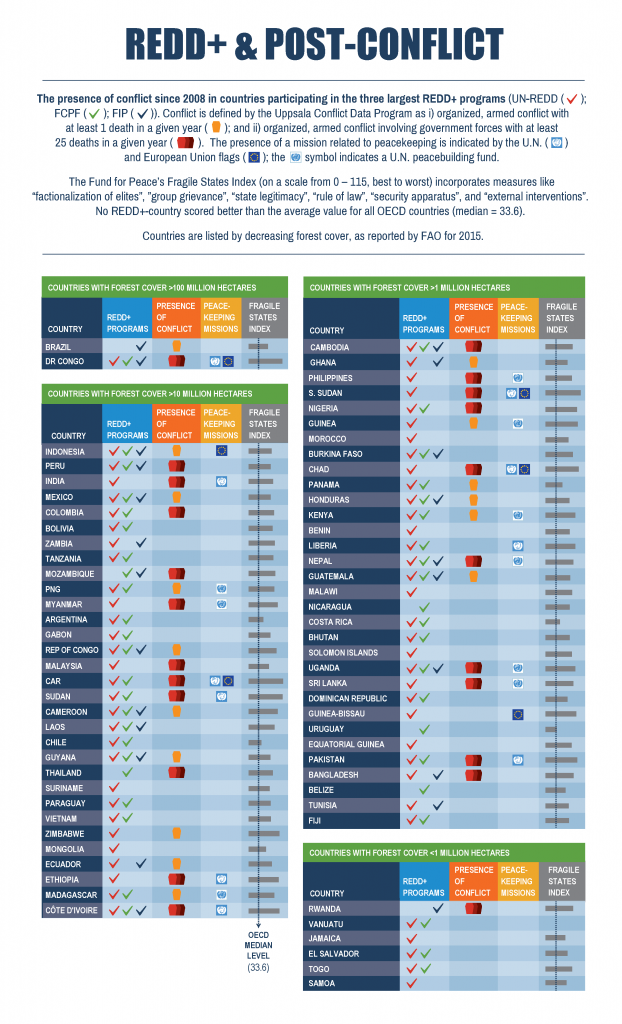 Fortunately, many of these countries are now relatively peaceful – twelve of them have U.N./European Union missions related to peacekeeping and nine have UN peacebuilding funds. But peace agreements are notoriously fragile. About half of all ceasefires fail within a decade and countries fall back into a “conflict trap” of repeating cycles of violence that undermine both development and good governance (as well as natural resource management). This dynamic poses a risk not only to peace and security, but to the success of initiatives like REDD+ operating in these countries.

But in crisis comes opportunity, and REDD+ could help reinforce peace processes around the globe. REDD+ offers a plausible alternative to industries that have contributed to conflict, such as industrial forestry or plantation agriculture. Governance reform and the convening of deliberative, multistakeholder processes associated with REDD-readiness can also contribute to “environmental peacebuilding.” If properly managed, REDD+ can potentially strengthen peace and security as much as it can mitigate climate change, improve environmental management, and support local communities.

As UN-REDD explains, “REDD+ is an effort to create a financial value for the carbon stored in forests, offering incentives for developing countries to reduce emissions from forested lands and invest in low-carbon paths to sustainable development. ‘REDD+’ goes beyond deforestation and forest degradation, and includes the role of conservation, sustainable management of forests and enhancement of forest carbon stocks.”

But when working in (post-)conflict countries, ensuring proper management requires that REDD+ programs are “conflict sensitive.” This involves understanding the dynamics of past conflicts, as well as the on-going legacy of this violence.

The most obvious legacy of violence is the “conflict trap” that (post-)conflict countries find themselves in, but there are a number of other generalities that separate them from countries that have not had the same history of organized violence. To be effective, REDD+-participants and supporters must first recognize these challenges in order to take advantage of the opportunities, as well as to manage the risk of failure and protect against unintended negative consequences.

The opportunities presented by (post-)conflict environments can include:

But (post-)conflict countries also pose challenges for initiatives like REDD+ that are offered as alternatives to “business as usual:”

These problems are complex and deeply-entrenched, and there will be no easy fixes. But given the prevalence of conflict in more than half of all participating countries, at the very least, REDD+ must endeavour to “do no harm.” Interventions should take care to avoid generating grievance that could fuel a resumption of violence that throws a country back into the “conflict trap. “ Better yet, by understanding the unique conditions created by (post-)conflict, REDD+ initiatives can not only increase their own chance of success, but contribute meaningfully to peacebuilding.