How much cocoa is coming from illegally deforested lands?

The author would like to thank Marigold Norman, Philip Rothrock, Genevieve Bennett, and Kerstin Canby for their contributions. This post is the second in a series on the cocoa supply chain.

In the first blog post of our cocoa series, we examined the voluntary commitments of influential chocolate companies that have been making commitments to ensure ethical, sustainable supply chains. We also looked at how some companies plan to get there using The Accountability Framework’s guidelines, and how compliance with these internal policies has been going so far. In this post, we turn our attention to what we know about illegal deforestation in cocoa supply chains.

Governments of a few key consumer markets, including the European Union (EU), the United Kingdom (UK), and the United States (US), are beginning to develop regulatory approaches to address deforestation and illegal land conversion in agricultural supply chains. This would apply to a range of commodities, which may include cocoa.

As highlighted in the first blog of this series, tracking commodities such as cocoa with complicated supply chains is challenging enough, let alone identifying the exact plot of land it was grown on. Much work has been done to measure deforestation around the world, but the extent of illegal deforestation has not been estimated, until recently. Forest Trends’ new report, Illicit Harvest, Complicit Goods, found that at least 69% of land cleared for agriculture was illegal, according to national laws and regulations. Report findings from case studies for Côte d’Ivoire and Ghana, the world’s leading cocoa producers, shed some light on the extent of the risk that imported cocoa is associated with illegally cultivated or cleared land in those countries. Companies, countries, consumers, and investors need to understand their exposure to this risk, or else find themselves complicit in illegal deforestation in producer countries and, perhaps in future, in violation of pending legislation in major import countries.

Both Côte d’Ivoire and Ghana contain portions of the West African Guinean Forest, a biodiversity hotspot home to threatened species, such as chimpanzees and forest elephants. However, rapid land conversion in both countries over the past several decades has left little forest remaining outside of protected areas (PAs). Between 2013 and 2019, Côte d’Ivoire and Ghana lost one million hectares (ha) and half a million ha of their forests, respectively. Commercial agriculture drove over half of this forest loss in Côte d’Ivoire and almost 80% of the half million ha lost in Ghana.

Forest loss due to commercial agriculture in Côte d’Ivoire, 2013-2019.

With the demand for land for cocoa production growing and little forest left to convert outside of PAs, farmers have increasingly been illegally clearing forests within PAs in both countries. In Côte d’Ivoire, cocoa production is the leading cause of deforestation in PAs and 40% of the country’s total cocoa production was grown within PAs from 2013 to 2019. For forest conservation advocates, that figure is staggering enough. For others, the scale of that risk is more impactful in terms of trade; in 2019, $2.2 billion USD in total cocoa exports have high risk of being grown on illegally cleared land.

The trend is much the same in Ghana: at least 13% of cocoa is linked to illegal deforestation. Most remaining forest is in PAs, and if all forest loss since 2013 is assumed to have occurred in these PAs, 45% of agro-clearing for cocoa is likely illegal. Despite major company pledges to zero-deforestation cocoa in 2017 (under the Cocoa & Forests Initiative), primary forest loss in Ghana increased in 2018 and in 2019, $312 million USD in cocoa exports have a medium risk of being grown on illegally cleared land.

Smallholders make up the majority of cocoa production, making it difficult to distinguish by satellite when it is shade grown and muddying efforts to track and verify supply chains. It is also impossible to distinguish between smallholder farming activity and subsistence farming via satellite. Land surveys on foot and frequent checks with smallholders are one answer to the information gaps, but there is only so much that can be achieved with boots on the ground. Field work requires tremendous effort and resources, not to mention the fact that individuals cannot cover as much area as quickly (or as easily) as technology can. Given these limitations, building reliable, sustainable supply chains also require government legislation and effective enforcement to help incentivize forest protection and prevent human rights abuses. Such government legislation exists in Côte d’Ivoire and Ghana, but enforcement remains a challenge.

Taking action beyond the forest frontlines

One of the ways to help combat illegal deforestation lies outside of the forest itself, by regulating the trade of the products incentivizing illegal deforestation in the first place. Without regulations to clean up supply chains across the board, product markets split, with some product heading to more transparent supply chains, and some destined for uses where legality is more uncertain. Voluntary sustainable supply chain commitments alone are not enough to curb forest loss at the scale needed, which is why import regulations in consumer countries can be a strategic complement to existing efforts.

The UK is among the first in the world to adopt this approach to address forest-risk commodities that may include cocoa. As one of the top cocoa importers in the world, forthcoming regulations in the UK have the potential to impact cocoa production and trade by providing a market incentive for companies with transparent supply chains and clear processes for identifying and managing forest-risk suppliers. The EU and US are drafting similar regulations. This could prompt wider spread reliance on sustainability certifications, such as Rainforest Alliance, which already help companies demonstrate just that. However, it is important to note that such certifications would have to be designed in each country to align with existing legislation focused on legality. 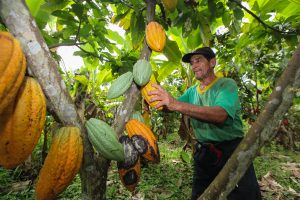 Companies themselves can be critical allies in pushing for demand-side regulations and helpful in encouraging supply-side countries to clarify their laws as well. This can be mutually beneficial – import regulations can help reduce the risks both import governments and companies incur when they interact with forest product supply chains. Partnerships between companies and governments can lead to increased production transparency, which helps stakeholders across the supply chain demonstrate due diligence and trace products to the farm level. For a product like cocoa, with such concentrated production and trade and known links to child labor and illegal deforestation, such regulations and alliances could be a powerful way to address multiple interests at once.

In the US, the Biden administration has stated its dedication to climate issues and forest protection, but efforts are in their early days. US Congressman Doggett (D-TX) introduced a bill in January 2021 that would exclude trade preferences to any country that fails to effectively enforce its environmental laws or meet its international environmental obligations.  It remains to be seen what pressures might start to emerge as the US, UK, and EU work towards regulating imports of forest commodities.

As detailed in the first blog in this series, companies can look to resources such as The Accountability Framework to help them prepare for impending import legislation and get ahead of competitors who may not be shoring up for changes. In the long run, this will help them perform due diligence, stay in compliance, and reduce delays and challenges associated with new requirements. For a commodity such as cocoa, with known links to child labor and deforestation – much of it likely illegal according to recent data – companies, consumers, countries, and investors stand to benefit from being prepared for the likelihood of new trade regulations on forest commodities.